Skip to content
Search
Close
My first version of this post was rather flippant. It read, simply:

“I’m within striking distance of my goal to identity 100 female American travelers, active roughly between 1850 and 1950. To celebrate, I’m launching a hashtag! Starting February 1, I’ll post a picture and some tidbits about one woman each day for the next 100 days. Follow along at @writeroughshod or at #100travelHERS! Let the Twittering begin.”

It didn’t feel quite right, but I hit publish anyway and closed the blog. Then I visited the mud pit that is my Facebook feed and watched, yet again, as so many of my acquaintances hurled clumps of political filth at each other. And for a moment, I lost faith in my project. In fact, I felt embarrassed by it. How dare I post pictures of women (most of them white), who traveled the world a century ago, when so many living, breathing women (many of them not white) are now unable to cross certain borders because they happen to have been born in a country America has decided to fear?

At one point last night, I thought it might be best to scrap the project entirely, to wait for a more “appropriate” time. But then I remembered a quote from Maya Angelou: “Perhaps travel cannot prevent bigotry, but by demonstrating that all peoples cry, laugh, eat, worry, and die, it can introduce the idea that if we try and understand each other, we may even become friends.”

I reopened the blog and scrolled through “The List.” I re-read their quotes and stared at their photos. I realized that I’ve been so swept up in prepping Tweets for my #100travelHERS blitz that I’d started to neglect the original mission of this project: to pay attention to these women, to really pay attention, and to listen to the lessons about life, religion, politics, and art that they learned the hard way.

“I am not the same having seen the moon shine on the other side of the world,” Mary Anne Radmacher once said. I know I am not the same woman I was before moving to Austria a year ago. I am more aware. I am more empathetic. I am tougher and less afraid than I used to be. I am also more appreciative of my home country — and conscious of how precious it is to have a home. I sense that most of the women on this blog would say similar things about themselves after their own respective journeys.

As we are today, most of us can’t change the things about the world we don’t like. But we can change ourselves into stronger, smarter, more capable versions of ourselves. And those brave women will probably be able to achieve a lot.

What I’ve learned most from this blog project is that travel isn’t just for the rich, young, and liberal. It’s for Christians and libertarians. It’s for the middle aged and the retired. It’s for schoolteachers and politicians. It’s for business owners. It’s for women. It’s for you.

At heart, Americans are pioneers, pilgrims, and seekers. We are the descendants of people who migrated, either voluntarily or by force, and built new lives in new places by blending traces of the old with the reality of the new.  Travel is displacement by choice, a ritualized expression of the American tradition of movement and cultural blending. It’s our collective heritage. It’s fundamentally patriotic.

And it’s important, especially now. Because you’ll never really understand what a border is until you cross one.

So yeah, I’m going to keep going. And I hope you’ll come with me.

“There is nothing in life that can compare with the delights of thinking. To grasp an idea and travel with it through a long process of evolution; to live with it, cherish it, compelling unfoldment that reveals hidden treasures, to run along with it, although the chase ends in mental chaos where one lands in the solitudes and waste places of thought, is joy unbounded. The journey often leads over some hitherto untrodden way which reveals food for the brain, enlargement for the soul, and inspiration for the battle of life.”

Few American women have blazed as many trails as Jessie Ackermann, who visited more than fifty countries and is believed to have circumnavigated the world eight times between 1889 and the late 1920s, when she returned to the United States and hung up her traveling bags for good. END_OF_DOCUMENT_TOKEN_TO_BE_REPLACED

Today is the anniversary of the armistice that brought WWI to an end in 1918. In honor of it, let’s meet eight women who worked as war correspondents in Europe between 1914 and 1918.

Despite several fantastic resources now available about female WWI reporters, a variation of this sentiment still occasionally pops up on the Interwebs: “During the First World War women war correspondents were simply nonexistent; the U.S. military accredited only one, then sent her off to Siberia, far from the main fighting fronts.” (That little gem appeared in National Geographic.)

But the accuracy of that statement is simply nonexistent. Women were most definitely reporting from the front lines, permission slips be damned. So let’s begin. END_OF_DOCUMENT_TOKEN_TO_BE_REPLACED

Today, Elizabeth Cady Stanton’s words ring as true now as they did a hundred years ago: “The history of the past is but one long struggle upward to equality.”

If nothing else, Hillary Clinton’s presidential candidacy has sparked a renewed enthusiasm for talking about America’s suffragettes. Much of that interest is tied to Hillary Clinton’s “white pantsuit,” a conscious nod to the color that was most associated with the Votes for Women movement, along with the mass uptick in Election-Day pilgrimages to Susan B. Anthony’s gravesite in Rochester, New York.

The suffragettes learned a lot of lessons the hard way, but perhaps chief among those lessons is that change is a journey — a journey that includes crossing lots and lots of borders in pursuit of a more equal world.

To be literal about it, Clinton traveled to 112 countries during her time as secretary of state, a number that makes her the most widely traveled U.S. state secretary ever. But long before Clinton’s miles of experience landed her the Democratic nomination for president, Lucretia Mott and Elizabeth Cady Stanton went to London in 1840. END_OF_DOCUMENT_TOKEN_TO_BE_REPLACED

For the first time ever, a woman is on the ballot as the presidential candidate of a major U.S. political party. Whatever your political affiliation may be, this is a big deal in the history of American politics.

So on the eve of this historic election, let’s look back and remember the women who helped us get here. On Election Tuesday, 1916 edition, Jeannette Rankin won a surprise victory to become the first woman ever elected to federal office, when she secured a Montana seat in the U.S. House of Representatives. Yes, you read that right: a solid four years before women could vote, Rankin was elected. She once said, “If I am remembered for no other act, I want to be remembered as the only woman who ever voted to give women the right to vote.” END_OF_DOCUMENT_TOKEN_TO_BE_REPLACED

On November 4, 1965, Dickey Chapelle was killed by shrapnel on a battlefield in Vietnam. She was the first female war correspondent to die in the field, but that designation doesn’t do her justice. Dickey was a tireless photographer, an emphatic patriot, and a plucky role model for young women in the Midwest.

Last year, Milwaukee Public Television aired a really good documentary about Dickey. As you listen to it, scroll through a gallery of her photographs.

Don’t have time to watch the full doc? Here’s a quote from Dickey about her love of country. I guarantee you’ll feel a strong urge to scrounge up that ol’ flag pin hiding somewhere in your dresser.

Dickey originally wanted to be pilot, and she received a full scholarship to study aeronautic design at MIT after graduating early from her high school in Milwaukee, Wisconsin. But she flunked out after skipping an exam to cover a stunt-plane exhibition instead. She made pit stops back in Wisconsin and Florida before landing a job as a PR writer for the TWA in New York. That’s where she took the photography class that radically altered the trajectory of her life and career.

We’re rarely able to get an up-close look at the moment when a woman becomes an artist. But Dickey wrote candidly about her earliest exposure to photography in her fascinating autobiography, which illustrates her gift as a storyteller both in words and images. Here’s the section about her introduction to photography: END_OF_DOCUMENT_TOKEN_TO_BE_REPLACED

If you haven’t noticed, this blog has a soft spot for historical women from the Midwest. And there just so happens to be a cluster of names that have close ties to my favorite state of all: Wisconsin. 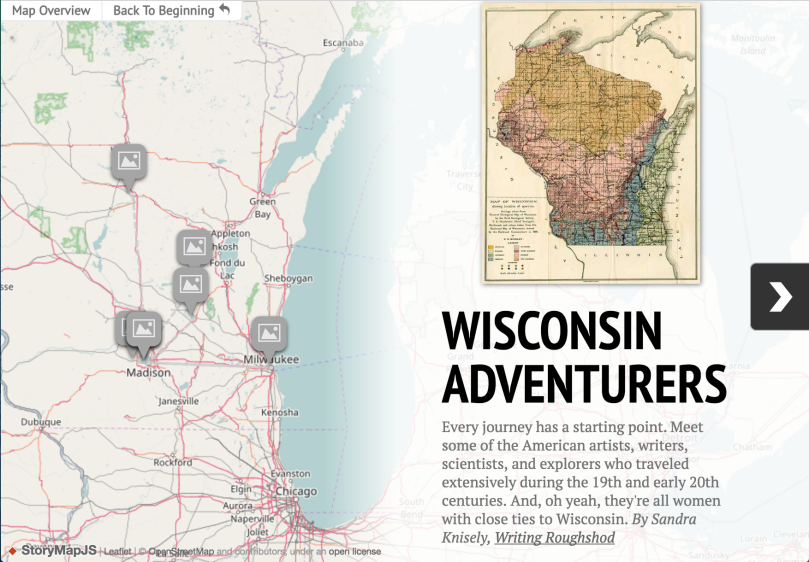 Unfortunately, WordPress won’t let me directly embed my pretty story map. Click the image for the interactive version or just scroll down for the list. END_OF_DOCUMENT_TOKEN_TO_BE_REPLACED

My Tweets
Back to top
Writing Roughshod
WordPress.com.