There are few issues as thorny as a woman’s decision to prioritize career or family — and it’s far from a new challenge. In 1919, newly divorced Rose Wilder Lane wrote her first novel on the subject, and a century later, it offers a striking look at how far we’ve come in terms of female empowerment and opportunity — and how far we still have to go. 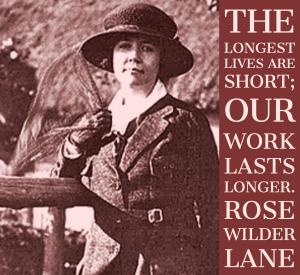 Rose Wilder Lane was the daughter of Laura Ingalls Wilder, the pioneer woman who wrote a “little” series of books about life on the American frontier. Rose had already written about a dozen books when Laura’s first came out in 1932, and it’s well established that Rose helped her mom whip her manuscripts into shape.

Rose, too, capitalized on American nostalgia for settler life and published several Depression-era novels set in the Ozarks. But Rose was more interested in wrestling with the social issues of the day, and her work was deeply influenced by her travels with the Red Cross in post-WWI Europe. Her time in Albania in particular helped influence her political ideology, which eventually morphed into libertarianism. Along with Ayn Rand and Isabel Patterson, Rose is considered one of the “founding mothers” of that movement.

A couple of years before Rose first went to Europe, she wrote a book about a young woman struggling to come to terms with her own ambition — and learning to overcome the men and women who stood in her way.

Diverging Roads traces the evolution of Helen from a backwoodsy teenager into a telegraph operator, San Francisco flapper, submissive wife to a con artist, hard-scrabble entrepreneur, and finally, a budding journalist with global aspirations. All by the time she turns 26!

Along the way, Helen’s long-suffering first love, Paul, just can’t let go of his narrow opinions about women, and it costs both them both in various ways. The book wrestles openly with the benefits and drawbacks of marriage for women on the cusp of suffrage, and it’s not clear how things will work out for Helen and Paul until the very last page.

But at the end of the day, the book is less a romance than a woman’s coming of age. And damn, does Helen figure her shit out:

“I’m sure of one thing,” she said earnestly. “It hurts to — to let go of anything beautiful. But something will come to take its place, something different, of course, but better. The future’s always better than we can possibly think it will be. We ought to know that — really know it. We ought to be so sure of it that we’d let go of things more easily, strike out toward the next thing. Like swimming, you know. Confidently. We ought to live confidently. Because whatever’s ahead, it’s going to be better than we’ve had. I tell you girls, I know it it.”

Anyway. It’s a good read, and at the very least, it’s worth downloading to the Kindle of every high school girl as a counterweight to The Great Gatsby. Because Daisy Buchanan ain’t got nothin’ on Helen Davies Kennedy.