For the first time ever, a woman is on the ballot as the presidential candidate of a major U.S. political party. Whatever your political affiliation may be, this is a big deal in the history of American politics.

So on the eve of this historic election, let’s look back and remember the women who helped us get here. On Election Tuesday, 1916 edition, Jeannette Rankin won a surprise victory to become the first woman ever elected to federal office, when she secured a Montana seat in the U.S. House of Representatives. Yes, you read that right: a solid four years before women could vote, Rankin was elected. She once said, “If I am remembered for no other act, I want to be remembered as the only woman who ever voted to give women the right to vote.” 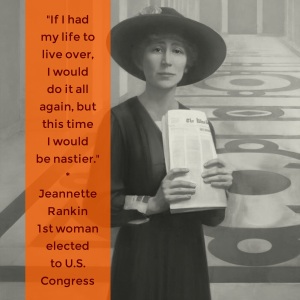 However, Rankin is best remembered for her strict pacifism; she was the only representative in Congress to vote against going to war against Japan in the aftermath of Pearl Harbor. There are dozens of great resources to learn more about Rankin’s congressional career. (Start here and here.)

Rankin didn’t make her first trip outside of the United States until after her Washington career was over, but her second act as a peace advocate was deeply influenced by her time abroad.

In 1946, Rankin went to India to study Gandhi’s non-violent civil-disobedience tactics. Though she never met Gandhi (he was assassinated in 1948), Rankin returned to India five more times. Rankin also made trips to South Africa, South America, Iran, Turkey, Ireland, continental Europe, China, and Russia. “All over the world people fell in love with Jeannette … she had an instant warm friendliness, and she was interested in everything,” wrote Rankin biographer Norma Smith. “She liked to sit herself down in the lobby of a hotel, say the Taj Mahal in Bombay or the Placer in Helena (or Paris or Mexico City or Honolulu or Moscow) and hold court. She always made contact with acquaintances wherever she went, and she knew someone everywhere.”

Rankin eventually brought her global lessons in peace-making back to the United States. On January 15, 1968, she led 5,000 women during an anti-Vietnam War march in Washington D.C. At the time of the march, Rankin was 87 years old.