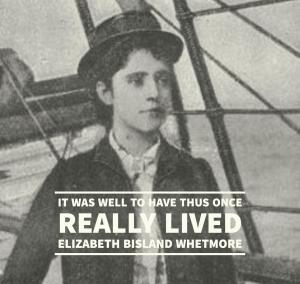 Sometimes we don’t get to choose the journeys we take. Or even have time to pack.

Elizabeth Bisland Whetmore was drafted into service by The Cosmopolitan to compete with Nellie Bly’s 1889 stunt to travel around the world in under 80 days for the New York World. (Bly completed the journey in 72 days; then-Bisland took 76.)

Even a quick skim of Bisland Whetmore’s book about her trip, In Seven Stages: A Flying Trip Around the World, makes it clear that her heart wasn’t in it. She’d never before traveled abroad, and much of her account is fixated on complaining about her (lack of) luggage, recounting inane logistics of the journey, and commenting on her un-photogenic traveling companions.

I mean, seriously, she opens the book with a detailed description of the morning she found out about the trip, complete with a reference to her bowel movement. I shit you not:

I read the papers leisurely, made a calm and uneventful toilet, and the very first intimation I received of the coming thunderbolt out of the serene sky of my existence was a hurried and mysterious request, at half-past ten o’clock, that I would come as soon as possible to the office of the magazine of which I was one of the editors.

But before you start to hate her, know that before the trip she was a rising New Orleans poet rather than “a serious journalist,” and in her later years, she wrote powerful stuff about the limitations placed on aging women in Victorian society. She chafed at the fame that came along with the Bly race, and after pounding out her recap book, she moved to London — and onward to better projects.

Exhibit A: In 1896, she wrote a poem-essay about the nature of dreams that is complex, rich, and thoughtful. I mean, come on, have you ever read a better description of the ridiculous splendor of the drunken mind?

[Perhaps] the potency of fever, of drugs, of alcohol, or of mania may open up deeps of memory, of primordial memory, that are closed to the milder magic of sleep. The subtle poison in the grape may gnaw through the walls of Time and give the memory sight of those terrible days when we wallowed — nameless shapes — in the primaeval slime. –Elizabeth Bisland Whetmore

Called the “most beautiful metropolitan writer” of her day, she was complimented awkwardly on her looks by Rudyard Kipling, among others. But Bisland Whetmore was acutely aware of how fleeting such praise was, and she’s credited with once quipping: “After the period of sex-attraction has passed, women have no power in America.”

In 1903, she published A Candle of Understanding, an autobiographical novel about life in Louisiana after the Civil War. It’s hard to find much about the book, but here’s a review from “The Writer: A Monthly Magazine for Literary Workers” that floats around the Interwebs:

One rarely comes across a sweeter, more candid and straightforward story than “A Candle of Understanding” by Elizabeth Bisland. It is a tale of the development of a fine character from childhood to mature womanhood, and it never fails to amuse in the telling of even trivial incidents of domestic routine, while it furnishes a true and touching picture of life in Louisiana after the war and about the time of the invasion of the carpet-baggers. In the midst of pathos it sparkles with vivacious accounts of the post-bellum condition of the ex-master and the freedmen and women. Although the story is told in the first person, there is no egotism in it, and the personality of the narrator is quaintly original and delightfully honest.

Anyway, I haven’t gotten my hands on the actual book itself yet, but I did find a great quote from it thanks to her awesome biographer, Matthew Goodman. This snippet alone is evidence of a much deeper and more mature writer than the persona in the around-the-world book:

The record of the race, hitherto accepted as the truth about ourselves, has been the story of facts and conditions as the male saw them – or wished to see them … No secret has been so well-kept as the secret of what women have thought about life.
–Elizabeth Bisland Whetmore

Sure, it’s ironic that the “facts and conditions” of the world that Bisland Whetmore depicted in her highest-profile book were ultimately so shallow, but hey, we all make mistakes when we’re young.

P.S. Featured art is from the issue of Colorado’s Chivington Chief, which covered the Bly versus Bisland race. From The Newseum.