A medieval historian buddy sent me a link the other day that I had to share with y’all. The National University of Ireland, Galway, has put together an awesome database of historical European travel writing dated between 1500 and 1850. There’s even a fancy name for this genre of writing: ars apodemica, or the art of travel.

I made a quick pass through the database and identified four women out the project’s current collection of 166 travelers:

Unfortunately, the essays by the English-language writers (Cavendish’s “An Oration concerning the Forein Travels of Young Gentlemen” and Macaulay’s critique of the Grand Tour) are both trapped behind library logins. Volland’s letters have been lost to history, but some of Félicité’s articles are available open source via her database page.

The limited number of women in the collection is likely due to the curators’  narrow definition of texts that qualify as “apodemic,” their word for texts that offer moral and philosophical commentaries on travel as a modern social practice. From the database About page: “Travel focuses upon European writing on theories and methods of travel rather than practical travel advice such as travel guides, route descriptions, or travel almanacs.”

That sounds super smart and heady, but by overlooking “travel guides and route descriptions,” the curators are excluding a large number of female diaries and letters, some of which almost certainly include the sort of philosophical musings on travel that the database aims to preserve. All we can hope is that later phases of the project will expand its scope and soften up a bit on the restrictions. (I really hate to point this out, but the curatorial team is composed of five men.) 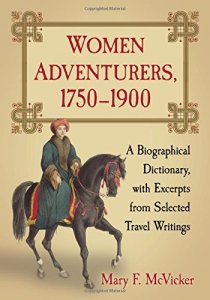 Anyway, Mary F. McVicker’s Women Adventurers, 1750-1900 is a better resource for those looking for a bibliography of early travel writing by women. Though the majority of entries are about English women, there are a few continental Europeans, too, along with about a dozen Americans. And every entry includes an excerpt of the woman’s own writing.

So click around the Galway database, but don’t let it fool you: women throughout history have been travelers, writers, and philosophers, too, regardless of whether some 21st-century dudes in Ireland invite them to the party.

But before the marketing push goes into full swing on this one, it’s worth hitting the pause button: Woodhull’s legacy is many things, but a hero for contemporary feminists should not be one of them. We cannot overlook her harmful work as an eugenics advocate just because we’re desperate for vintage female mascots. 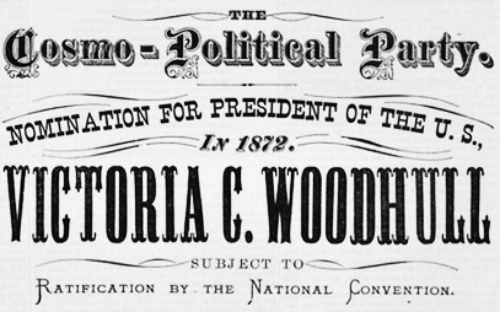 END_OF_DOCUMENT_TOKEN_TO_BE_REPLACED

You might remember a post from awhile back about my hunt for the first American woman to get a passport. (The answer: we don’t know, but she was probably listed as “and wife” on her husband’s passport.)

Well, over the past couple of months, that post evolved into a piece for Atlas Obscura, which went live yesterday. Here’s the lead:

The current U.S. passport includes 13 inspirational quotes from notable Americans. Only one belongs to a woman, the African-American scholar, educator, and activist Anna J. Cooper. On pages 26-27 are words she wrote in 1892: “The cause of freedom is not the cause of a race or a sect, a party or a class—it is the cause of humankind, the very birthright of humanity.”

If equality is a journey, then it should come as no surprise that passports have helped American women to cross some of society’s most entrenched cultural borders for more than a century.

I made a quiz! Click here to find out your nomadic doppelgänger. Because history is fun, dammit. 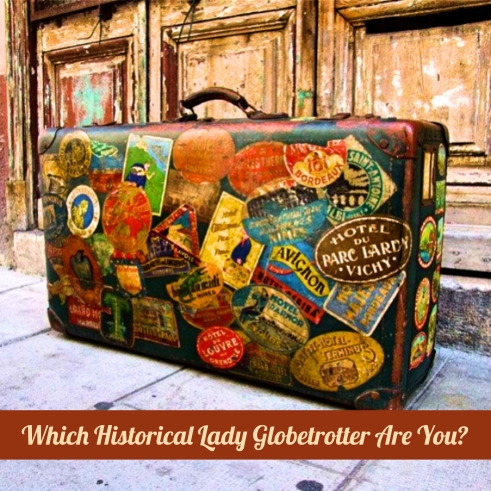 My first version of this post was rather flippant. It read, simply:

“I’m within striking distance of my goal to identity 100 female American travelers, active roughly between 1850 and 1950. To celebrate, I’m launching a hashtag! Starting February 1, I’ll post a picture and some tidbits about one woman each day for the next 100 days. Follow along at @writeroughshod or at #100travelHERS! Let the Twittering begin.”

It didn’t feel quite right, but I hit publish anyway and closed the blog. Then I visited the mud pit that is my Facebook feed and watched, yet again, as so many of my acquaintances hurled clumps of political filth at each other. And for a moment, I lost faith in my project. In fact, I felt embarrassed by it. How dare I post pictures of women (most of them white), who traveled the world a century ago, when so many living, breathing women (many of them not white) are now unable to cross certain borders because they happen to have been born in a country America has decided to fear?

At one point last night, I thought it might be best to scrap the project entirely, to wait for a more “appropriate” time. But then I remembered a quote from Maya Angelou: “Perhaps travel cannot prevent bigotry, but by demonstrating that all peoples cry, laugh, eat, worry, and die, it can introduce the idea that if we try and understand each other, we may even become friends.”

I reopened the blog and scrolled through “The List.” I re-read their quotes and stared at their photos. I realized that I’ve been so swept up in prepping Tweets for my #100travelHERS blitz that I’d started to neglect the original mission of this project: to pay attention to these women, to really pay attention, and to listen to the lessons about life, religion, politics, and art that they learned the hard way.

“I am not the same having seen the moon shine on the other side of the world,” Mary Anne Radmacher once said. I know I am not the same woman I was before moving to Austria a year ago. I am more aware. I am more empathetic. I am tougher and less afraid than I used to be. I am also more appreciative of my home country — and conscious of how precious it is to have a home. I sense that most of the women on this blog would say similar things about themselves after their own respective journeys.

As we are today, most of us can’t change the things about the world we don’t like. But we can change ourselves into stronger, smarter, more capable versions of ourselves. And those brave women will probably be able to achieve a lot.

What I’ve learned most from this blog project is that travel isn’t just for the rich, young, and liberal. It’s for Christians and libertarians. It’s for the middle aged and the retired. It’s for schoolteachers and politicians. It’s for business owners. It’s for women. It’s for you.

At heart, Americans are pioneers, pilgrims, and seekers. We are the descendants of people who migrated, either voluntarily or by force, and built new lives in new places by blending traces of the old with the reality of the new.  Travel is displacement by choice, a ritualized expression of the American tradition of movement and cultural blending. It’s our collective heritage. It’s fundamentally patriotic.

And it’s important, especially now. Because you’ll never really understand what a border is until you cross one.

So yeah, I’m going to keep going. And I hope you’ll come with me.